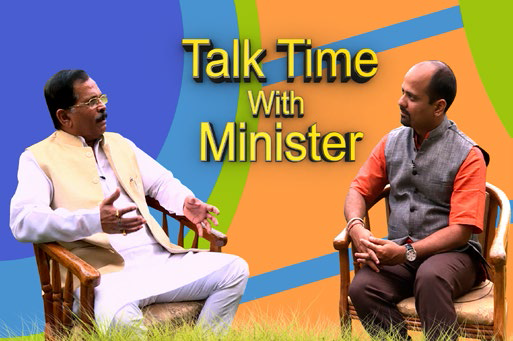 We sincerely wanted to bring back holistic medicine to the masses and this was one of the reasons for setting up a separate AYUSH ministry.

The people are also receptive on the changes and have welcomed holistic medicine which has been forgotten of late due to the advancements in modern medicine. Holistic medicine always treats the cause of the ailment; rather than the symptoms, it has been successful practiced by our ancestors.

We have taken up the cause to strengthen all PHC’s (Primary Health Centres) at the district to provide AYUSH form of treatment and equipping them with the necessary infrastructure needed to provide holistic treatment.

We have also started research and development centres to support AYUSH form of medicine. R&D centres are very important, most of the advanced countries invest heavily on R&D for want of more information on various sectors/ research areas. We all know that

Nagesh Desai: You were talking about Narendra Modi-ji’s visionary move to elevate AYUSH as a separate ministry and take Yoga to the world. Don’t you think this is a revolutionary decision that would help the masses to get holistic treatment and popularize AYUSH?

Shripad Yesso Naik: Yes. The decision to elevate AYUSH as a separate ministry from Modi-ji this is indeed a revolutionary and great decision. However, I also feel sad that we are not able to use AYUSH to its fullest extent; people are still dependent on modern medicine and the benefits of AYUSH vis-à-vis modern medicine are unknown to the public. Within 6 months of assuming power, Modi-ji has introduced Yoga to the world.

This decision was welcomed by 177 countries across the world and International Yoga Day was celebrated on 21st June. Yoga is now attained popularity for its ability to cure diseases and even serious ailments. Our focus is not just on development of Yoga but also on encouraging other forms of holistic medicine which include Ayurveda, Yoga and Naturopathy, Unani, Siddha and Homeopathy as it is side effect free and comes at a very low cost.

Nagesh Desai: Celebrations such as Lovers Day, Fathers Day, and Mothers Day are being celebrated, which do not have significance culturally or otherwise in India. However, there has been no emphasis laid on health and we have totally ignored to provide adequate importance on health. After Modi-ji has assumed power, International Yoga Day was celebrated, Ayurveda Day was celebrated. When are the other forms of holistic medicine getting their due recognition? I am talking about Homeopathy, Unani, and Siddha etc.

Other forms of medicine including Unani and Siddha will be given due recognition and celebrated as soon as possible. It is the strong willingness of our government to celebrate and give due recognition to Indian holistic medicine.

Nagesh Desai: AYUSH form of medicine is being practiced in many of the advanced countries. However, it is saddening to note that we are not practicing this form of medicine and rely on modern medicine. Moreover, aspiring AYUSH professionals are worried about the employability on completing courses in AYUSH. They are worried about on getting a job after completing their education. What are the employment opportunities available to AYUSH professionals in the days to come?

Shripad Yesso Naik: Any courses or degree done in AYUSH has lot of value academically and has very good employment opportunities. There are very good employment opportunities available in foreign countries for those students who have completed these courses in AYUSH form of medicine. Government of India has signed MoU’s with 11 countries. Along with research, we are also ensuring that there is no stone unturned to ensure there are lots of opportunities available for AYUSH students in research and employment sectors.

Nagesh Desai: As Minister of Ayush you are leading from the front through various initiatives, at the same time AYUSH T.V. has been incepted to provide awareness on Ayurveda, Yoga and Naturopathy, Unani, Siddha and Homeopathy. Both our objectives are aligned for the same cause. AYUSH T.V. is a 24 hr channel dedicated for holistic medicine, within a short period of time we are able to make huge strides in the industry.

Shripad Yesso Naik: I congratulate AYUSH T.V. for promoting our ancient forms of medicine; you are providing a great message to the society by broadcasting such programmes on holistic medicine. AYUSH T.V. is doing a great job by popularizing the ancient form of medicine. I wish AYUSH T.V. brings out more such innovative programmes on holistic medicine. We shall provide all kind of assistance to your channel for taking it to the masses.

Nagesh Desai: What is the role of AYUSH Department in ensuring a ‘Rog Mukt Karnataka’ and ‘Rog Mukth Bharath’?

Shripad Yesso Naik: A person who is free from diseases; fit, sturdy and healthier is an asset to the nation. Those who are suffering from diseases must get rid of the same and attain the best of health. If you are fit and fine you can achieve everything in life. Therefore, i appeal all of them be healthy and follow a healthy lifestyle. AYUSH Department in general and Government of India in particular would leave no stone unturned to ensure health for everyone.

Nagesh Desai: There have been lot of discussions on Integrative medicine; we are also at a stage wherein we cannot eliminate Allopathy from our medicinal system. What is your view about ‘Integrative Medicine’?

Shripad Yesso Naik: Discussions on ‘Integrative Medicine’ are underway. We have to tap the collective power of all such medicines which are useful to the society. The medicine should reach the patient quickly so that he gets treatment.